Already nothing is suspicious about proving grounds leaderbords

good thing you devs added total mission time statitics to the proving grounds. Because as far as i get it, worst fears have come true from day one. My team just happened to take 2 1st places as for today - and it took a lot of trials and coordination to get them. But lets look at the said TMT:

bugs.png1249×450 246 KB
Our attempt took four veterans and several hours to get everything right. But 2nd and 3rd results were made with 2 and 1 players and, according to the timing, 2 and 4 attempts accordingly.
.
.
.

illuminati.jpg1250×437 161 KB
Almost 2 hours to get this run. And i would say - it was completely random. Big kills came only from observer reinforcments, which spawned really randomly and seemed not to react to any tactics or manuevers to lure them in for such a small amount of designated time. About 1 in 5 attempts at best went under 2 minutes. But meh, 2nd result was made in just 4 attempts.
.
.
.

cyborgs.png1252×435 251 KB
first two attempts at a 15th cyborg retallation were made on the 1 (FIRST) attempt by 3 and 1 (ONE) players accordingly and 1.6 times faster then trustworthy result by 4 players including YOPG, which took 43 minutes at least 4 attempts to achieve.

If proving ground mechanics is the same on both PSN and Steam, and thus comparable, then PSN scores are even better. I dont have TMT stats on them, but lets just look at the 1st place times: 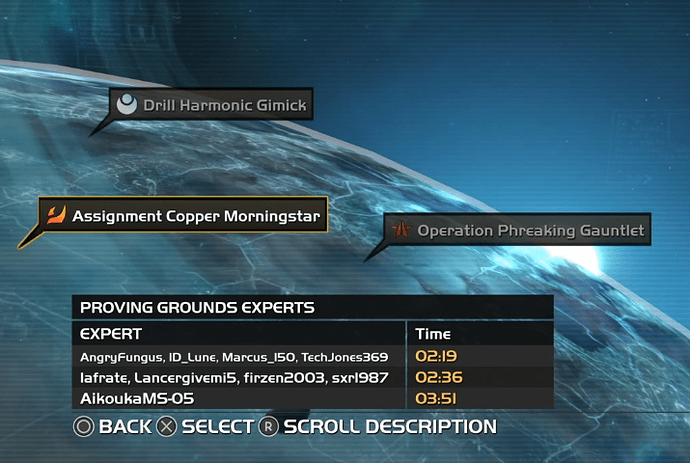 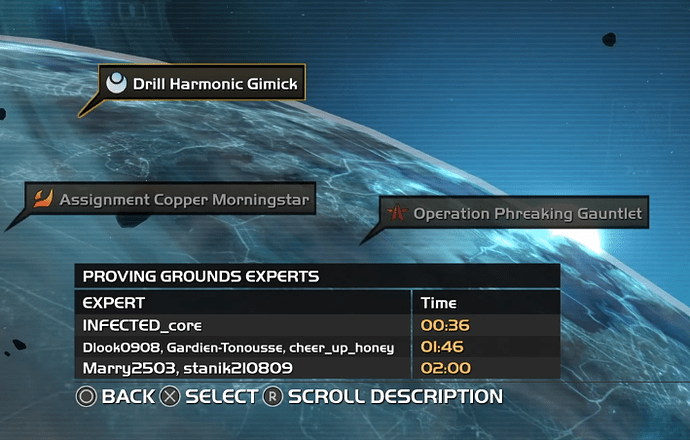 2.19 compared to our result of 3.20 on bugs. Lets do some math. Getting out from pod gives you 6 second minimum if solo, each rocket is 45 seconds and evac gives you 30 seconds min. Total is 2.51 without time to move between objectives.

on illuminates a solo guy gets to kill 40 squids in exactly 0 seconds, his time minus pod minus evac.

What i do suggest? Go from top 3 leaderboard to quantiles. It would be much more in line with the spirit of the game, where you can finely adjust your challenge level up to your liking. Also i would assume it might make the leaderboard much less of an interesting target for hex wizards to mess with.

But wait, we’ve been pushed from both positions. 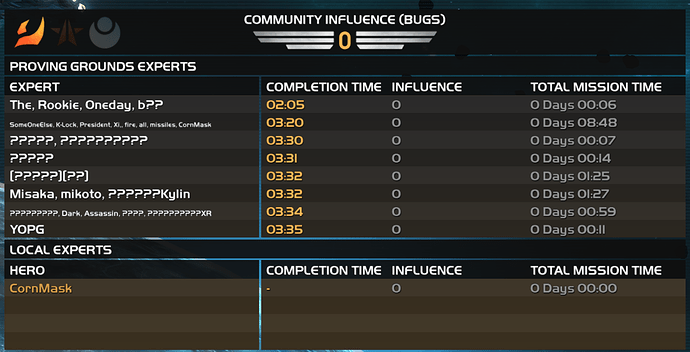 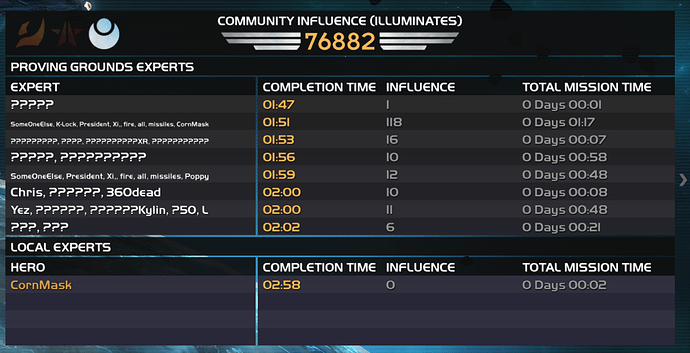 illuminati2.png1274×652 358 KB
On illuminates it is by solo first attempt dude. Why bother having 4x damage by having full squad when you can do all the job yourself?
On Bugs by 2 or maybe 3rd attempt dudes got the result that beats even that undertime one from PSN.
1 Like
Tachyon.Xu October 26, 2019, 3:54am #3

We made contact with [CN]Decade. He said his mission was not the same with ours, but something similar with the Bug one - protecting some launch pads. He just let the launchpads explode and got that 6 min record, and saying this is a strange bug. He wasn’t using any cheat program so it’s this bug we should blame for.

Just like I worried in their announcing thread before, cheat can easily destroy this new mode. The Bug 205 record is in theory impossible, since the time for launch pads added together has exceeded this number. Although this can be explained as bug, that 36-second record is definitely done by cheat.

Proving Grounds and the new capes in dream now only make me feel upset. The new added random loadout is also awkward since there is no much chance you can have ammo supply.

I love Arrowhead, I bought everything Arrowhead sells on Steam, and till now I’ve played HD for thousands of hours. But now I just want to uninstall the game until AH’s reaction for this.

Thanks for the detailed report as well as your suggestions for how to improve the distribution of the capes.

We will look into entries that seems fishy and in the cases they are the result of bugs, try to fix them as soon as we can!

Ahh yes the most mediocre wins again…just like democracy. I think I was briefly in a team with some of the leadercheaters on PS4. One of them had a duplicate mirrored player going as well. That’s when I decided to team kill them all. This happened all the time on PC but it was the first time I have seen it on PS4. Some definite bugs. I should have stuck around to see what they were glitching on. It’s like boss spamming to get on the boards all over again. I gave proving grounds another whirl but I think I will just stick to missions and team killing.

If proving ground mechanics is the same on both PSN and Steam, and thus comparable, then PSN scores are even better. I dont have TMT stats on them, but lets just look at the 1st place times:

2.19 compared to our result of 3.20 on bugs. Lets do some math. Getting out from pod gives you 6 second minimum if solo, each rocket is 45 seconds and evac gives you 30 seconds min. Total is 2.51 without time to move between objectives.

I play from time to time with Marcus_150 (mostly on Illuminate RS13), he’s legit.

An I played a couple of games with ID_Lune yesterday night, that made me understand how these completion times can be achieved…

At first, I was like you… On bugs challenge, how is it possible to get a shorter completion time than the mandatory time required for all objectives and evac (2mn51s)…?

They simply spam the “melee glitch” move which gives a tiny boost speed if executed perfectly.

Then, the squad has simply to leave an objective about 5 seconds before the timer ends (easy to do).

I think it’s even possible to leave earlier (7-8s): a teammate stays at the border of the screen to keep the rocket in view, the 3 others run to the next objective, then when the zoom out is at max, the teammate kills himself. So the objective is completed offscreen, and the whole team gained a lot of time. It just requires a perfect team coordination.

It’s the only way to explain these crazy times ^^.

EDIT: On the other hand, the 00mn36s on Illuminates, is clearly a glitch, everyone agreeds on that.

Melee dash sprinting was attempted to be fixed a bunch of times. I expiriemented with macro automation and quit the idea, because for me the best possible execution is still bit slower then regular sprinting and not really worth it for short distances. Trip to the first rocket takes you about 10 seconds at best, getting from the pod for 4 player is around 8 if we somehow solve the screen pull issues, evac is 30 at best possible (usually its around 33-35 including all the animations). Which puts us at -44 seconds to the remaining naked sum of rocket launches. You obviously can’t gain any time on the 3rd to evac trip, so you have to arrive to the second and third rockets when the previous one is still at 0:22.

Even if it is somehow possible through patience and coordination, it wouldnt explain how do some dudes achieve their records on just a few attempts.

More records are on the way‎ 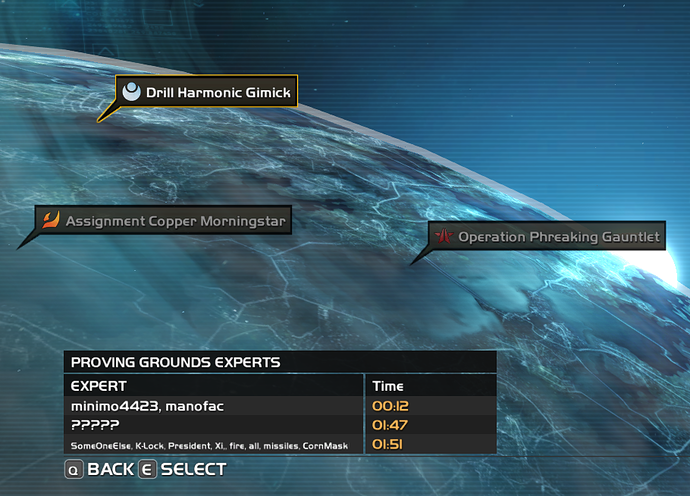 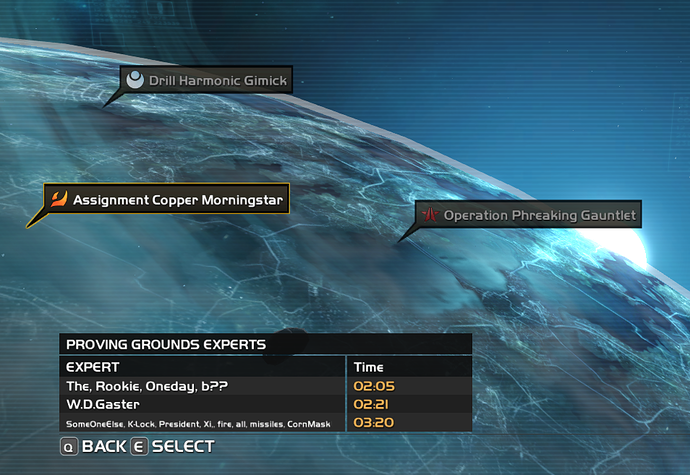 But I don’t think that 2.19 record can be achieved with only these methods. Besides by cheating or bug exploiting, another explanation for this I can imagine is that the host has an awful computer, timer on his computer is slower than normal. When someone has a low frame rate, it can be observed that his moving speed, and even the flying speed of rumbler shells he fires are ridiculously slow. I haven’t tested but I guess this also works for the PG timer, and some records can be explained in this way.

By the way, hardware macro automation is vague between cheat or not. The code for calling shuttle is fixed so it can be simply programmed. And melee-run can be programmed to assure the player of maximum running speed. In theory these operations can be done by mankind, but only when you can be as accurate as machines. Unfortunately, hardware macro can’t be detected by software, AH can only judge from behavior features.

Programming is my real life job, but a game for programmer is never what I want.

Helldivers in all of the places except for PG isnt competitive at all, so the only expirience you can steal from other players by any sort of cheating is learning to overcome in-game obstacles. Besides, most of the things in helldivers that can be macro-automated give you a such a little boop in performance, that only thing it does is reducing wear and tear on peripherals.
As for using macro in speedrunning - tool-assisted speedruns is quite a standart on speedrunning scene, only limit is that your tools should use the same IO as a human does.

Sorry I don’t agree with you, in China TAS is not accepted by all speed runners I know. TAS result has only performing meaning, showing where the limit is. The spirit of Olympics, “Higher, faster, stronger”, is defined for human, not for machines. We humans can never run faster than cars, just like you can never speedrun faster than TAS. But there’s still race in Olympics, if you can accept TAS, why can’t you accept tool(car)-assisted-race?

By the way, once macro is accepted, where is the border? What tool can be allowed and what can’t? Is it unfair for helldivers who don’t know how to program macros? I think helldiver is not a game only for programmers, and that’s not I want.

Lastly, records in PG board gives in-game reward, this is different from the games you knew and mentioned which are tolerant for TAS. And I guess it’s divided into TAS board and none-TAS board if TAS is accepted.

Is it unfair for helldivers who don’t know how to program macros? I think helldiver is not a game only for programmers, and that’s not I want.

I think i just made a joke tho - how many software engineering experts does it take to fudge a macro in a modern millenial-oriented freeware macro constructor?

But I don’t think that 2.19 record can be achieved with only these methods.

I think I can close the debate if there is cheating or not, bug/glitch exploit or not (the later is the most likely)

And there’s two good friends I play very often with in the team who achieved it (one plays on PS4, the other on PS3 like me). I can tell they are not cheaters, even less “glitchers” (but very good players)

I still have to ask them how they did 1’57"… But on the other hand, I’m not sure I want to know, because it could ruin my interest for Proving Grounds Time Attack…