But I thought I’d post that here… ban me here for it too, I don’t care, clearly the bottom line is far more important than human rights or even the safety of citizens in our own countries. Who do you really work for Arrowhead?

Isn’t it Spittzer and Moderators responsible for moderation? I’m sure none of them are related to Arrowhead in any means, moderation is community-ran.

But I thought I’d post that here… ban me here for it too, I don’t care, clearly the bottom line is far more important than human rights or even the safety of citizens in our own countries. Who do you really work for Arrowhead?

well, it looks pretty bad for AH, when a moderator for their discord takes a unilateral action like this, yes?

if that is the case. I probably wouldn’t ban one of the biggest shills for the game without at least talking to him.

sorry for so many edits, but that’s what I’d like to believe too, it’s just a mod who decided I am not allowed to post that, and banned me for defying him… but the nature of the incident really makes it look like somebody is in bed with the CCP.

My best bet would be to contact one of the moderators directly and clear it up.

I know nothing about anything related to you being banned or any of the circumstances surrounding it. I can’t speak to that.

Just for the record, the “Official” Helldivers Discord isn’t actually official, it’s just established, and I’ve always disagreed with the misnomer (the Gauntlet server is the exact same way, while we’re at it). That is to say, it isn’t by Arrowhead nor is it managed by Arrowhead (nor Sony, nor Warner Brothers), or even officially recognized or endorsed as far as I’m aware. Arrowhead doesn’t have any real power in either of these servers. If they wanted the server to be shut down or something like that, they would be at the mercy of the admins to respect their wishes, but it wouldn’t truly be their say ultimately.

The people that run it just decided to call it “Official” because it sounds nice and gets people going I guess. And since there are people in the server that work for Arrowhead, I guess people don’t really question it (especially since even Discord recognizes it enough to “partner” it, and Arrowhead seems lenient enough to not argue it).

that’s going to be a little difficult considering I left the discord, maybe if I had had a little more experience with being banned, I’d have the usernames of people to contact, because I would have gotten them before leaving. I don’t ‘friend’ many people on discord because it’s a little pointless when you can just msg them, unless you’re banned I guess.

Guess I was only muted, but they took the banner down… I have to put it back up if I go back… but I don’t want to fight with the mods, so I will take my exit before things get ugly.

Okay, so now I know within an acceptable degree of certainty based on my theories about them, that is was not the ccp, pla, kgb, or cia… It was in fact, the gay mafia. I might go back.

But not to somewhere where somebody with a bias and a little bit of authority gets to push me around, if I’ve broken a rule tell me the rule I broke, what the punishment is, how I can avoid disciplinary action in the future… I won’t be muted to then be insulted without any explanation as to what I did wrong.

why u ignore our epic warnings?!??? General is for helldivers related chat not for you to be epic political and say bad stuff!!! Just because you hate China doesn’t make it okay to post stuff like that imagine if i posted that message except with saying I hate Canadians and the Canadian flag blocked out would that really be appropriate? Even in off-topic it would be cringe and probably deleted! Already warned you to not post stuff like that in general we has off-topic section! Also in your opening post you admitted you posted homophobic stuff in off-topic lol is that really a good thing to be admitting? We didn’t take action for that because we didn’t see it in off-topic but if we did we would probably give you a warning as well and general is much more important to be moderated! 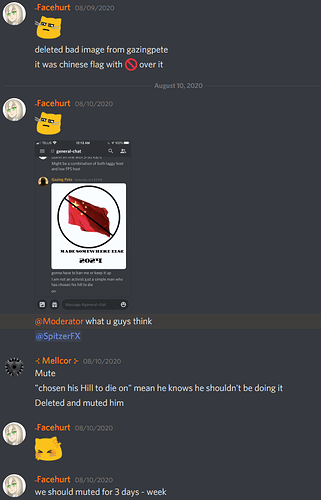 Didn’t even ban you lol! well now ur banned cuz you kept leaving and rejoining to bypass your mute so you could spam your message linking to this thread (in general chat as well and not even mess hall) lol!!

So I’m banned now, Why would you just mute a person with no explanation whatsoever. And I’m sorry if I didn’t understand it wasn’t a ban… but is that what you do, just silently exercise authority and tell people nothing… regardless of their history on the discord. Nobody said a thing to me about any of this, you act like it is my obligation to find out why you took the action you did, and when I complain about it… you ban me from the discord!

You’ve left me to speculate for days why these actions are being taken and remained silent to everyone up until this point, why?

Also, go look in the gauntlet colliseum rafters, you’ll see a familiar image… so what was the reason for the very first action of taking down the picture?

image1141×98 19.8 KB
The mods said political stuff shouldn’t be in general 1 month ago and after you posted your epic flag edit I put a warning in general chat 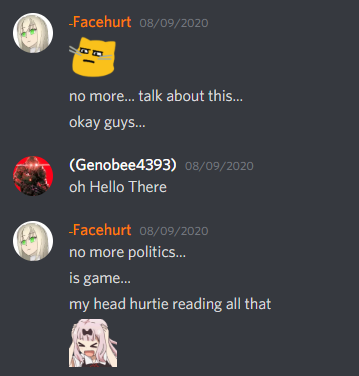 then you did it again wtf!!! I agree i could of warned you better so i will remove the ban so if you come back and be nice in general chat and follow the rules and don’t put homophobic stuff in mess-hall then you can stay

Someone should take your keys away, you had a problem with homophobic stuff and this is the first time you’re telling me…

I can’t read your mind dude, I don’t know what’s gonna offend you, and what isn’t… you have to tell me what the parameters are and if we have a problem you could communicate.

Rule 1- Be respectful. Any disrespect, hate speech, racism, sexism or general volatility will not be tolerated.

Yeah, they’re very specific, not at all open to any interpretations at all.

So, that flag was ‘general volatility’… That’s the problem with invoking these rules… you need to actually invoke them

I understand this isn’t a court of law, but no explanation is what monkeys do.

Alright, I’m coming back… this was lethargic… I guess I won’t post the homophobic stuff, but I think y’all should get some thicker skin, this is after all, the internet.

Dang dude, I had no idea that the discord wasn’t actually official. Good job dropping that info

good job snagging it before it got taken down, tactu

that’s your warning? “my head hurtie reading all that” how about, “I will have to mute you if you continue”

I’m not sure what I did?

Oh I thought you found this through the discord.

Alright. I don’t usually comment on posts over here, but allow me to clear up any confusion as the head admin for the Official Helldivers Discord and make sure no misinformation is being spread.

Pete, you’re a valuable member who has been a great part of the community for a long time. That being said, I’m sure you are fully aware we instituted a no politics rule recently as a result of recent incidents in the U.S. and globally. Our platform for Helldivers is simply not the place to be discussing political situations.

With that in mind, you posted anti-China memes and opinions repeatedly in the main channel and were warned by moderators to stop. After being warned, you continued, and were muted. After you were muted, you continued to leave and rejoin the server to bypass the mute and continue posting the same thing, claiming you’d “chosen your hill to die on” and we’d have to “keep it up or ban you.”

Clearly, based on what you were saying, you knew you were breaking a rule by telling us we’d “have to ban you.” Yet, you continued to rejoin, bypassing your mute, to post the same content. That is incredibly immature behavior and frankly I’m disappointed in how you handled it. That being said, it is important for me to clarify that you were NOT banned prior to this post. You were being muted whenever you left and rejoined in order to avoid your punishment.

You’ve admitted in your original post that you were posting offensive content - I’m not sure why you’re attempting to claim you were unfairly punished without any warnings when both Satire and Mellcor gave you explicit warnings not to post the content you were posting. You would have simply been temporarily muted but you chose to repeatedly leave the server and rejoin to evade your mute and continue posting offensive images. Please don’t act like you had no idea what you were doing and that nobody spoke to you - you’ve already admitted that’s not the case.

I respect your opinions and your right to hold them, but our community is not the place for politics to be discussed as it very easily leads to arguments between members and general toxicity or incivility. This has been a rule for a while now. It’s not because of any specific opinions that the staff team hold - it’s a general rule that applies to all sides of the political spectrum.

As for the “Official” part of the name - our server has half a dozen Arrowhead staff who have administrative powers. While I am not part of the Arrowhead staff team myself, multiple Arrowhead members do have power in our server and absolutely do have the right to revoke the “Official” branding or the Partner status if they saw fit. I discussed this with Arrowhead some months ago when they asked that the Verified status be transitioned to Partner status. Please try not to spread misinformation.

I did find it through the discord, but when you said snagged I thought you were saying I saved something or screen shotted something