Just posting some balance requests, bugs and other things I’ve found along the way of my many years playing Helldivers. The suggestions are some things to make the game a bit more sense but are mainly conveniences/script things.

EDIT: SInce I cannot UPload more than one photo due to fourm Limitations please see this Imgur Album Here: https://imgur.com/a/l0ESe

Balance Issues:
Laser Weapons: The current damage model of laser weapons doesn’t meet their intended role, the Trident continues to be the end-all-weapons due to its high damage output and infinite ammo. I suggest the following things to make the weapons more accurate to its intended role and to make more sense. 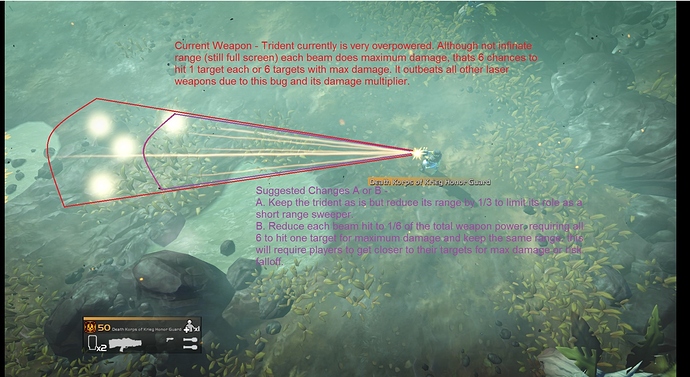 I will keep updating this with more information as I find them.

I’m not sure how long you’ve been using the MLS-4X and/or Obliterator, but their fixed arcs are a feature, not a mistake/glitch/bug, and the MLS-4X will seek targets, which you’ll notice if you actually fire it at an enemy

It’s just my opinion, but I don’t think having infinite ammo anti tank is a good idea (RE: LAS98 Suggestion)
Actually I have a lot of opinions about all this but I think I should keep them to myself, honestly.

Other than that, good spotting on the bugs!

Actually, it’s normal how the ammo warning functions on the ARs.
The Liberator is the first gun you get, so it starts warning you earlier.

It’s not 10%, it’s 10 shots left.
Every other weapon has a much lower warning count than the Liberator, % wise.

I don’t know about the tracer rounds, don’t really pay much attention to that. I will now, though.

Besides than that I don’t agree with most proposed “fixes”, I’m sorry to say. Perhaps if we got alternate weapons (lightsaber style tanto, etc), but I dislike it when stuff is taken away.