I find myself losing interest in HD, and the primary reason for this is the direction of the game.
When one starts out with a character, one’s character grows in effectiveness and ability in the game. One unlocks better stuff as they go, until they reach the point where there is nothing more to unlock.
Presumably, one will also play more difficult missions as one’s skills improve. However, this trend in the game reverses itself as one plays beyond the point of unlocking things, and begins to treat the game as more of a personal experience.
If one has played for a while, and is observant, one discovers some subtle and not so subtle aspects to the game which when taken together are becoming tedious and annoying to the point of detracting from the game.
The trend is to disempower characters, and increase the level of lethality of the playing field to those characters.
Now, I’m sure there are a few mouse players who will tout the advantages and sheer joy of playing essentially powerless characters that have to run for it without pause, and die repeatedly, but I am not one of them.
A large part of this trend involves the game simply deciding to kill one’s character, usually pointlessly, via turrets, splash damage, or amazingly mighty friendly fire.
Quite possibly, there are players who enjoy being squashed repeatedly by pods equipped with homing devices so accurate, that they kill one’s character before one can even step free of one’s own pod. I suppose that there are those who don’t get annoyed that while one’s character can be called back ad adnauseum, one’s equipment will not be, although the “gift” of cool down time carries over with aplomb.
My guess is that there are players who find themselves immersed in fun when enemies that are not even on the map sound the alarm, but for myself, this is both pointless and stupid.
Probably the most ridiculous event is having a tank sound the alarm. I just cannot find any logic to a massively armoured vehicle assuming observational omniscience.
I could go on, but I’ve written enough posts here concerning problematic elements of the game, that anyone who cares to read them can do so.
Ultimately, I find myself in disagreement with the aforementioned trend of the game. I am finding that my style of play does not harmonize with a direction whereby dodging, hiding, and running scared are the only viable approaches.
I do believe that HD can be brought back to a game that allows multiple styles of play, but for this to occur, there must be some empowerment to characters.
My last mission was played a while ago now, right before the alleged war glitch struck for the second time in a row, awarding a war loss for a war won. It was level 12 cyborgs, and upon starting the mission, I threw my resupply a comfortable distance away. As often occurs, endless enemies descended, pinning me against a cliff, whereupon the resupply sought my character out, killing my character, and losing my equipment as the rest of the team ran for their lives.
I wondered why I was bothering to play this game, because the result of continuing without any equipment was going to be just another exercise in powerlessness, when I shrugged and left the match.

I find myself losing interest in HD

Hey, that’s okay!
One can’t forever play the same game ad-nauseam, as you so eloquently put it.

It could just be that you’re suffering from burnout, which is normal.
Don’t worry about it, just find something else and take a (seemingly needed) break from Helldivers for a while.

You hate every aspect of the game and yet you still play it? I don’t get it. 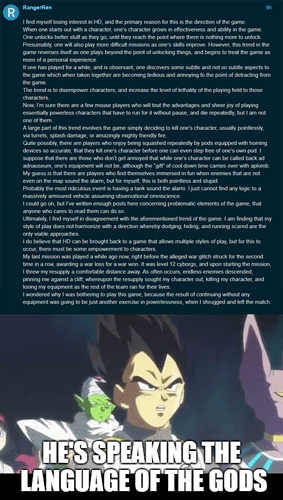 But seriously, I second what YOPG said. And yeah, I know I’m making light of the situation, but I already know of what will happen if it’s taken any more seriously by anyone.

Im with @9.0 on this one. Even if the game is not in a state you would prefer, there are aspects of the game that interest you, otherwise you would never have played the game or bothered to join this forum. So just take a break and try something else. If helldivers is worth your time, the flame will automatically be rekindled in due time.

I like your critical view on the game, even when your arguments are on the demanding or unrealistic side. So as a fellow diver, I salute you.

And whatever you decide to do, you’ll find me on the surface.

I have stated on numerous occasions that HD does some things very well. I have enumerated these aspects several times, yet it appears that some who read my posts either don’t understand that there are strong positive elements, or easily forget that I have covered them. Lets just cover a few for the record.

Hey, welcome back, hope you had a nice time off, what did you get up to?

It certainly appears that the primary activity on this blog is from a core of fully levelled up players. This core should understand that their playing experience is not congruent with the gaming experience of others who do not share their focused dedication.

I actually agree with you here, but this is something prevalent in almost all video game communities, so a moot point.

Believe it or not, some would enjoy the challenge without having to deal with stupid and capricious actions of the game WHICH CAN AND DO DETERMINE IT’S OUTCOME.

There are other difficulty settings, you know.
There’s no shame in not playing the top difficulty, and I have certainly not seen anybody shame you for it here.

Believe me, there is not much randomness to this game, any time you see something, and decide that it is a random evil, consider that perhaps you’re not seeing the whole picture.

If the game is aimed at being annoying, and it’s purpose is to deliver slams and hits to achieve this purpose, then it is successful, but it is not enjoyable to those who prefer a noble challenge.

I do agree that some of the higher difficulty settings can feel a little contrived, but then, again, nobody is forcing you to play them.

I think you would find far more enjoyment from progressing through the difficulties, moving on upwards only when you have mastered play at that difficulty.

Wouldn’t it be more satisfying for you to adapt to the core gameplay AND quirks at each level, masterfully sidestepping these so called sadistic evils and giving the game a knowing smirk?