I’m wasting time at work, so I don’t have time to get into nitty gritty details atm.

These are some vague ideas I’d love to see some iteration of:

Acid-Poison Paintball SMG
Fires small balls of acid-poison that explode and splatter in colorful, damage-over-time corrosive sprays on contact. I’m not sure if this would impact tank type enemies – perhaps the top-tier upgrade would add a DoT corrosive effect to heavy tanks, but would not make this an AT weapon per se.

I haven’t thought through the bows. They might require some new type of damage, attacks or effects to justify them in Helldivers’ high-tech world.

Now we have full set of Ideas!

Going back to the topic,

“Tiny Liberator”:
Minigun, the same version as EXO-44 Walker Exosuit has, few changes to make “Tiny Liberator” lighter at a cost of smaller drums. When upgraded you can reload while moving and add mini-stun rounds.

"MG-60 EL ‘Big Boar’ (BB)"
A new LMG for the Helldiver arsenal, liberating an old design from a former foreign communist borg sympathizing country back during Old Earth, and incorporating it with a tried and true “democratic” design; we introduce you to the MG-60 EL, known as ‘Big Boar’ or ‘BB’ for short. It’s a bullpup box mag LMG using the same heavy battle-rifle caliber as the AR-20L ‘Justice’. Much like The MG-108 ‘Stalwart’, the recoil is heavy and requires long bursts to adjust, unlike the Stalwart, it has a smaller mag capacity, slower ROF, and a much heavier recoil, but makes up for it with the power of Justice!

(To envision what it looks like, take the Bullpup system from the PKM and incorporate that into the M60 for maximum Liber-tea.) 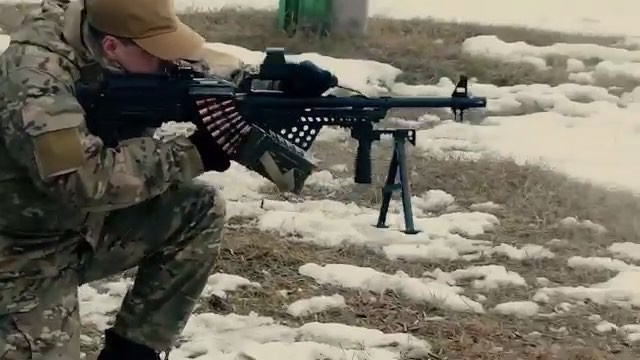 I’m still waiting for an Illuminate Sniper type call down weapon. Long charge, devastating blast. Would be super challenging to use solo, but could be clutch in a squad.

I really like this idea. All hell breaking loose. Brood Commanders closing in a long line.

The bugs are getting ever closer and your squad are downing.

You’re downed team mate tags are vibrating for reinforcement. The Brood Commander is on you now.

laser noise now silence. The engines of the drop ship humming as it comes in to land and your fellow squaddies are dropping in to the sweet smell of cauterised bugs.

*edit - obviously the charge weapon above…

Upgrades give it ap rounds and a ministun effect making it useful for facing large medium targets.

Helldivers needs handheld Miniguns. While any type of ammunition is conceivable, from plasma to explosive and laser, the tried and true metallic cartridge option would be wonderful. Upgrades could include AP ammunition, increased ammunition capacity, and/or “stability”, the latter being an interesting gaming concept.
The Minigun, or Miniguns, as in the case of multiple loadouts, as with the walker mechs, could unlock with new levels, or difficulty of missions.
Personally speaking, I’d rather have a Minigun than a shoulder fired weapon. There is room for a weapon of this type, and besides, it would be awesome if done correctly. Bring out the Miniguns!

Out of all possible weapons, the Miniguns offer the most potential for direct fire weapons to reach parity with indirect, shoulder fired weapons, IMHO.
Yes, I believe it would be a good friend for your MG. (I find the Stalwart indispensable on capture objectives).
Of course, I also join others in wondering about the future of the Shredder Missile.

What about a Bowie Knife for close combat , maybe you could throw it if needed then retrieve it.

Do you believe in destiny, soldier?

So far this looks terrible. Here are the important bits.
Upgrades:

Flavor Text: An experimental and temperamental prototype that was deemed too unreliable for factory production, it suffers from severe recoil and accuracy issues. However, it is still fielded by certain Helldivers who appreciate the uniquely wide arc and long range of its fire.

Correct, this is an assault rifle with disgustingly fire-rate, mediocre damage per bullet with no armor piercing, awful recoil control, and pitiful magazine capacity.

It also has 2 barrels that fire in an alternating pattern without upgrades. When maxed out both barrels fire together, hurting recoil but effectively doubling the weapon’s fire-rate. And the bullets are also fire bullets.

Yes, like an itchy feeling where you can’t scratch that spreads across your whole back, it is the fate of Super Earth to bring Managed Democracy to the entire universe. This weapon will burn away the darkness; it is our destiny made real.

I imagine it looks kinda like these guns but with rifle stocks: https://www.forgottenweapons.com/furrer-m1919-double-barrel-smg/
https://en.wikipedia.org/wiki/Villar-Perosa_aircraft_submachine_gun

So I conceived of this as one of the only combinations this game is lacking, in my opinion. A rapid fire, long range, incendiary primary. I’m not sure if it needs (or should even have) the bayonet. It doesn’t make much sense mechanically, since of how the barrels sit apart from one another. In my opinion, aesthetically, it’s extremely important that the barrels and clips sit exactly as they do on the Villar Perosa. The bayonet might hurt this look but, more importantly, I think it might need one more limitation in addition to the QoL stuff. I love bayonet dodging but I don’t want this gun to be too versatile.

I pitched this idea to Lein and a few others, my main concern being that if it had decent QoL stats it’d be far too strong. It is a support primary, like the Defender of the AR family. It still has plenty of killing power but, similarly to Paragon, you’ll want to spread your bullets among as many enemies as you can to maximize the effect of the phosphorous rounds. The damage I think is just about right. It’ll cut through your standard cyborg patrols about as fast as your liberator if you tap fire.

), which can then be finished off with conventional weaponry.

So for Helldivers, we’ll skip the antlers, and otherwise…

ICE-41 Ice-inator
Compact ice spray gun capable of projecting ice several meters. Enemies hit with ice will freeze in place temporarily. My suggestion is a last upgrade that adds the effect of slowing enemies for a period of time when the freeze effect turns off.

P.S. I started this post like a month ago but never got around to posting it. I appreciate that the forum software saved my un-posted message as a draft.

Cryo weapons. Damages enemies slightly, slows them down for an extreemly short ammont of time (have to keep attacking to keep them slow, but might be able to spread the shots to keep more than 1 slowed).

I guess, I haven’t been playing long enough to even know what mini-stun is.

It works pretty much exactly how you described. The enemy stays stunned for as long as you keep shooting at them. You should give it a try, you might like it. Defender and Knight both do it (they’re both SMGs).

I’ll mess around with it. Would also like cryo weapons.

I got some weapon Ideas as well

Poison dart side arm: A pistol sidearm that fires darts that poison enemies.

Throwing stars: Functions like a side arm except that they bounce from the first target to an additional target.

Beam sword: A laser sword comes with a shield that has limited charge to allow for a dedicated melee option.

Hunter bolt gun: A crossbow that initially fires explosive bolts that could possibly be upgraded to penetrate enemies before it explodes. Another upgrade could be a multishot or rate of fire upgrade.

It would be awesome if we could throw our self on the grenade to save the team. If people think it could disrupt the balance it can be included if you have shield or armor only. It wont be used much I think, but it would make you a hero from time to time ^^

That’s a cue for this relevant Captain America scene.