[I’m tired from work, and lazy, so I’m re-posting this from the Steam forums. I think I’m remembering correctly that Ranger DLC was in the original PC version’s ‘basic version’, the $19.99 version. And then at some point it was removed. If I’m wrong, I’m sure someone will correct me

While I don’t expect Arrowhead do do anything to commemorate it, Dec. 7 is Helldivers’ 2nd anniversary as a PC release on Steam. So I’ll commemorate it!

A few things I remember…

I thought this was great, to be honest (I bought the DD version). Put all of us on the same playing field and without all those DLC toys, sometimes you really had to scrap and strategize to overcome higher diffculty battles. And no all terrain boots for anybody, so we all had to figure out ways to make do on snow maps. Only the one Exosuit, limited vehicles, no omnipotent AT turret. Sometimes limitations are more fun, imho.

I may actually suggest this in the ‘Suggestions’ forum – have a weekend event with certain limitations in place.

imho, the things that non-fans complain about – friendly fire, screen lock – are really the biggest factors in encouraging people to work together, and at least much of the time, become friends. Along with the simple gameplay mechanic of helping an injured fellow player up off the ground. I mean, in real life probably no stranger’s going to dash through a hail of gunfire, grenades and tank fire to help me, but in Helldivers that occurred and occurs like in every game.

Probably it shouldn’t have surprised me given Arrowhead’s development of Magicka on PC, and that its separate dev team’s Gauntlet reboot launched on PC first. I guess I was just surprised that Sony supported releasing Helldivers on PC, and I’m glad they did

May your global campaign outlive all of us. Not to be morbid…

If the devs doooo fancy commemorating this with a steam sale I pledge to purchase the deluxe edition so I can play at work on my laptop!

Currently only a PS4 owner…

Currently only a PS4 owner…

There are so many great people on PS4

Oh, happy anniversary. I knew it was December something, but couldn’t remember the day.

I suppose I can see why people would dislike the shared screen. I definitely don’t share that opinion though. It’s a teamwork mechanic, but a lot of people just happen to be bad at it. Shared screen is one of the best decisions made for this game as far as I’m concerned. Pretty sure I wouldn’t enjoy the game nearly as much otherwise.

Complaining about there being friendly fire in the game, on the other hand, seems very irrational to me. Shooting someone and it having no effect makes no sense except for the sake of simply making the game easier, which isn’t needed at all.

All in all, I’m very happy with the game we’ve got.

You don’t need to tell me that

I’m loving it and seeing a lot of lvl 1’s recently too!

I thought Helldivers was released in March?. and the shared screen is one of my favorite features it lets me play with others in the same TV screen without splitting the screen making everything small. Helldivers is my favorite game and buy copies for my friends to join the war and support Arrowhead. 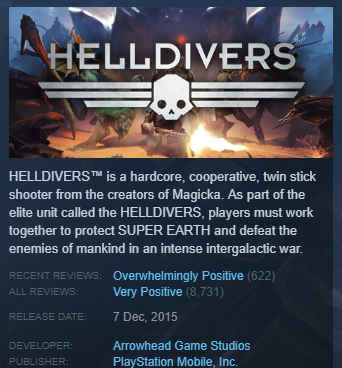