Hey guys,
There is still one thing in Helldivers that I want to ask. One think that I have no clue, how it’s working. The question is: What is “Standing” on the profile screen? It’s there all the time. Since start I have it on “Neutral”. And everyone I have asked has it too. Once I was told, that it has something to do with reputation. I have heard, that bad standing player wouldn’t be able to match with good one. And it’s based on number of reports / commendations. But does anyone know more about it? How many commends do I need to get to improve my standing? Or how many reports could drop me to bad standing? And why everyone has neutral? Maybye the number of reports/commends needed for changing standing is sooo high so noone could reach it. Or it is because players don’t even know, they can rate the coplayer? If that’s true, we should get them know somehow… to make this function work. Don’t you agree? But how? Let’s discuss it. 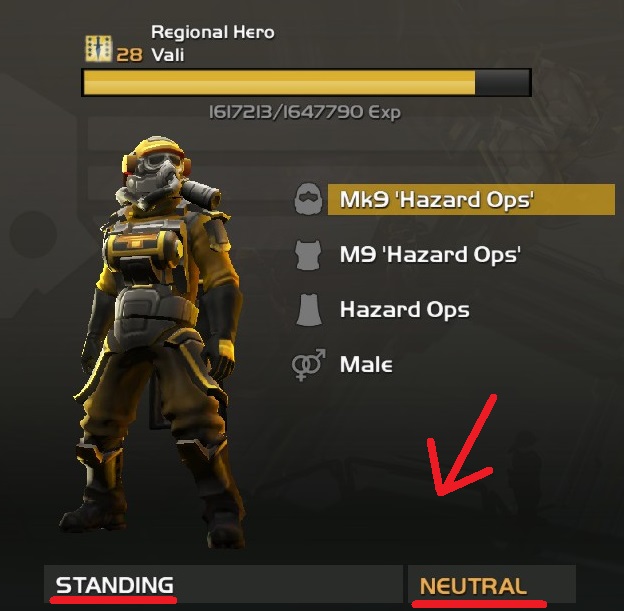 Standing is based on reports and commends, as you’ve said, and what it changes is what lobbies will be made available to you (“good” players play with other “good” players and so on).

I have multiple accounts that I play Helldivers on. I have had it where one account had “neutral” and another “good” and they had completely different lobbies available to them (I’ve never had a “bad” standing before, but I imagine that would be a third set of lobbies).

It doesn’t affect anything at all, it’s just for you and only you can see it.

1/2 every week? Isn’t that pretty much? Thats why i always have just about 2 commends even though I have over 160 hours on Steam

Newbies must be on 0. This system is not balanced well. Even if every tenth player I met knew about ratings, I would still be on neutral. But players don’t rate others at all.

When I was still playing with randoms I always had around 10-15 commends, if you really enjoyed playing with few of them go ahead and first hit commend button, they will do probably the same. I don’t see a problem at all

That’s what I always thought.

My details might not be 100%, but I know it’s not a meaningless cosmetic stat. Arrowhead explained it vaguely before somewhere.

In our Support center FAQ there is more to read about Standing, Commends and Reports (plus many other things)

Yeah I saw it long time ago, but I don’t think it works anymore. I never noticed it.

That standing doesn’t work anymore? It should have the same functionality as before, we haven’t made any changes.

With my “good standing” rude and toxic players could still join me. I expect them to be in a “bad standing” I’m not sure if they were.

Maybye it’s caused by community. As i told before. Players simply don’t know they can rate others, based on theirs behavioral. And the: “halve it each week” function is pretty bad. Maybye it would work in game like Overwatch with 40 millions players., where everyone wants to rate everyone. But here?

Hah… even active players can’t get more than few ratings. Why halving it so often?

Just played 4-5 missions with randoms, I don’t have problem with it: 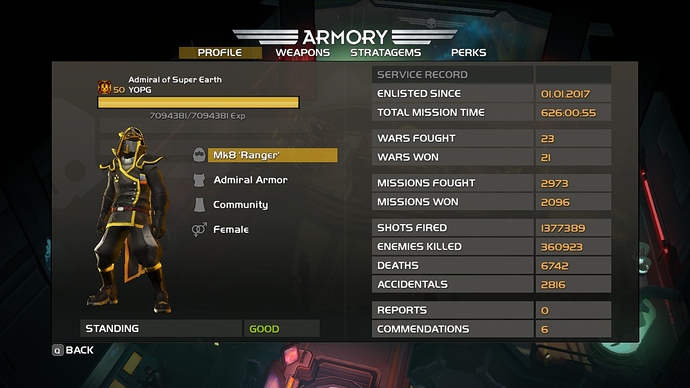 @Lein reply in this thread was pretty much spot on.

Reports and Commends need to decay every week otherwise players with a bad standing will have no chance of ever redeeming themselves. If they made some mistakes when they were new, it would be unfair for them to be stuck with a bad reputation forever. Likewise for Commends. If a good player suddenly deflects to the dark side, then they would have a good reputation but horrible actions.

Can you just do it every… .second week?

I think that’d be better.

I think it would take too long for people’s standing to change if it isn’t done weekly. Can you imagine being stuck on a poor rank for half a year just because you were new and made a few mistakes? It would not be good for the community as a whole, imo.

Yesterday had a level 50 join our game in the middle of a firefight with Illuminates. I didn’t catch his ID, being somewhat preoccupied with events.
This guy immediately gunned down our heavy weapons master and shot me in the back before leaving the game. PS network would not pull up the recent player list, so this guy gets away with it.
I do wish the player ID would stay up in the options menu until a new mission is chosen, or the flight deck is abandoned. This would help reports to go to those who earn them.
It really annoys me that disruptive players can exercise their inner nasty this way, yet in this case Mr Nasty did not throw our game. We managed to achieve mission success despite his antics.
Further, reports could be locked. Report unlock occurs when a player kills his teammates.
I feel that some fine tuning could really help to discourage disruptive play.

The system is good the way it is. It’s not meant to keep unpleasant players from joining you ever; some will fall through the cracks regardless of what system is place; that’s inevitable. But if you can at least facilitate the process of getting clean rooms, then that’s a good thing—and that’s what this system does, and I dare say well.

To add another perspective to what ForeverAPeon has said about the long-lasting standings, a griefing player could just quickly build up some commends over a week or two (commends aren’t that difficult to obtain if you’re behaving even decently, and remember, they’re not being halved each week, so it’s only building up at this point) by acting nice (or just not particularly bad). You could easily get 20-30+ in about two weeks with no halving. Once that’s done, that player has access to “good” rooms for a long time, despite their recent behavioral habits.

I know “good players going to the dark side” was already mentioned in ForeverAPeon’s first reply, but I just want to reiterate it within the context of the idea of “month-long” standings. Again, the thought makes me appreciate the current system.

Even in the example of the unpleasant player “getting away”, I mean, he still got away. That is to say, he was no longer in the room causing trouble. The situation was still alleviated.

The thing is with this game, even though you can never fully be void of unpleasant players, you can still easily be rid of them within seconds. The only real problem was on PC where kicked players could join back under a name change, but Arrowhead just fixed that like a week or so ago, so really, there’s no more major “needs a fix” issues anymore in this area as far as I’m concerned.

Lein,
I think maybe the PC community is a little more competent, and has a better grasp of the game than the PS community.
PS also offers a higher security level, at extra cost, which makes players using that service invisible to players like myself.
Just to be clear, I do not blame AH for disruptive play. Clearly, the responsibility goes directly to that disruptive player, and yes, it was a bit of a vindication that despite the rather stupid antics, we were able to rescue the mission.
I am not suggesting that it is possible to create a system that is disruption free, I simply wish it wasn’t so easy for them to escape reports.
Yes, there is always another point of view, and sometimes I believe that SOME kicks and reports are accidental, wrong command input.
However it I might be, the reality for my play is that disruptive players do exist. I hate to say this, but it seems one must be aware of this, and have one’s finger on the options command.