Tell us what games you play?

Gauntlet Slayer Edition it may not have the most hours played but its been the most consistent game to be installed in my library so its always ready if someone hits me up for a game. I’m always on the lookout for a good Hack’n’Slash ALWAYS. A lot of LoL also but Starcraft II is my passion especially watching the GSL. I also quite like PoP specifically the “latest” one The Forgotten Sands. Deus Ex any but MD, ShootMania (no more oz servers rip), Orcs Must Dies, DA: Origins, Braid… Querky Steam games like Refunct and The Beginners Guide etc. The list goes on…

I play HELLDIVERS™, Gauntlet and The Long Dark.
Mainly Helldivers: 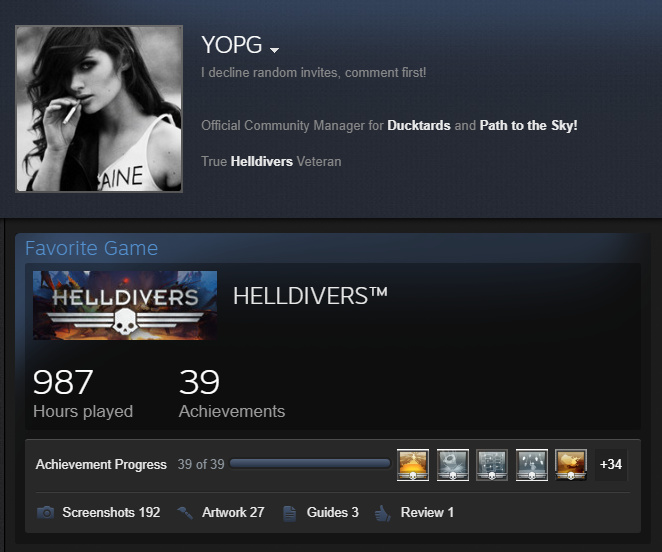 Got tons of favourite games

but Witcher 3 is number one for me. And always will be. Officially, the best RPG on this planet ever made. Also reading books. And as a folk from central Europe (Slav) it touches my hearth

Sry. No new games. HD took my life by storm. Find something you like and let it kill you xD 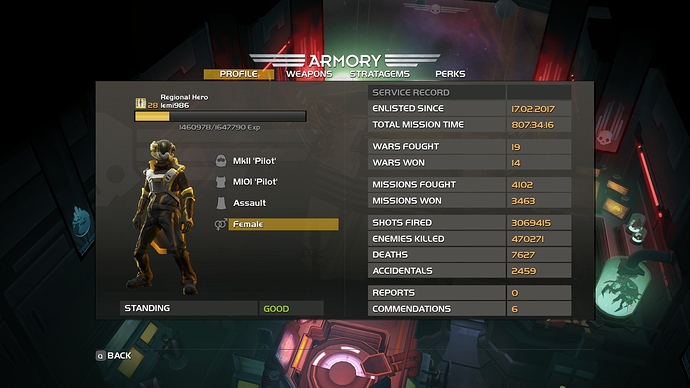 I bought Factorio about 1 month from now,but newer find the time to play due to HD and my job . . but will start soon , I think

Most games are ‘1 and done’ and have a shorter lifespan than the latest phone or tv. Their relevance is short lived and not long after telling you, it will be finished and i will be onto something else.
More interesting are the games that have tenure on your HDD because you keep going back to them.
Obviously there is helldivers whenever a new war starts (it’s an ocd thing - i’ve fought in every war and don’t want to break the streak) or if friends are on.
Other games that i often play are Nex Machina, INVERSUS and Resogun (mainly for the weekly challenge)

I’m a sucker for a good twin stick shooter or a fun arcade style game and inbetween these i may grab a mainstream title - usually excluding pvp, racing, fighting or any monetized full retail game.

I mostly play games to socialize with my friends and right now we’re into CS:GO and Dota 2 (even though we fell off about three years ago, and have struggled ever since).
When I play single player games it’s usually something story driven such as Mass Effect, Dragon Age, Telltale, Fallout, Elder Scrolls, etc.
Other than that I like co-op games like FORCED, Divinity: OS, ibb and obb, Trine 2.

Wait… you Have lost 5 wars? How did that happen?

Same with my stats, I have around 24 wars fought and only 22 won, but I have never seen Super Earth fall, all wars were won.

its just been Helldivers, Team Fortress 2, and Rainbow 6 Siege from me recently

Being a slowpoke, I’m currently getting through Zelda BotW. Just started playing Link between worlds on my daily commute as well… My favorite games are social ones, ranging from hardcore Helldivers to relaxing party games, like Jackbox or Ultimate Chicken Horse (and boardgames!). In the singleplayer experiences I favor the Dark Souls series, the Zelda series, Undertale, and in general puzzle games.

Helldivers, Dishonored, and Dishonored 2. Mainly Helldivers though—I have more hours in it than the rest of my Steam library combined. I tend to pick one or two games and stick with them for a long time. Before Helldivers, I had about 6,000+ hours in a game, and it was pretty much the only game I played for about 5-6 years.

I’m all over the place:
-I revisited Tom Clancy’s The Division for a few weeks but got burned out again.
-Currently playing Finnish dev 10Tons twin-stick shooter Tesla vs. Lovecraft, which is a chaotic, adrenalized twin-stick (sometimes in a dual-barrel mech), with teleportation movement against screen filling hordes of Lovecraftian monsters, with extensive perks, weapons and abilities. Great fun in small doses – not sure how long I’ll stay hooked; I’m stuck on its 2nd “Aether” difficulty at the moment. The funniest ability literally drops a giant “10 ton weight” that splatters massive groups of monsters.

-On flip side, disappointed with 10Tons’ “Time Recoil,” a twin-stick which tries to jazz things up with a slo-mo gimmick but for me is mostly just frustrating as it’s a “get shot once, you instantly die” type game. Probably heading for Steam refund for me. UPDATE: I did request refund on this. Ironically, Cusman just told me on Steam he likes Time Recoil. So there you go.

-Had a wonderful time with platformer/Dig-Dig type Steamworld DIg 2. Picked up its predecessor on sale other day but haven’t played yet.

Upcoming:
-Plan to participate in Steam beta starting about Feb. 28 for twin-stick roguelike Synthetik by a German duo based in Berlin. They’ve very nice/forthcoming on Steam forum and Discord. The couple week test is mainly to focus on its online 2 player co-op, leading up to its March 15 Steam release.

-Also keen on March 2 side-scroller blaster Guns, Gore & Cannoli 2 – a true sequel that moves its setting over to late WWII Europe, and that adds 360-degree aiming (instead of horizontal-only), 4-player local/online co-op (screen lock in local only; no friendly fire – Belgium-based dev answered my questions on these) and an “AI Director” to appropriately scale to the number of players in the game. Should be a comic book-ish bloody hoot for fans of stuff like the Metal Slug arcade games. That’s a Steam release first, with PS4, XBone and Switch versions planned for later release.

-And speaking of ‘dev duos,’ the makers of FTL launch their belated unrelated followup title, “Into the Breach” on Feb. 27. Features “minimalist” turn-based mech battles on ever-changing environments (i.e., blow up a dam to flood the map; attack a generator and shut down the map’s power grid etc.). What’s supposed to be unique is you’re informed in advance what the enemy is about to do, then you react/respond to that. As opposed to “make your move and see what the enemy does.” It’s a bit hard to me to wrap my tiny brain around it, but this is what I read in interviews.

I havn’t played helldivers in some months, but that’s mostly because of work and some personal issues, however me and my wife used to play alot of it last year. Quiet an awesome game. Apart from that i play a lot of souls/bourne games.

I only play Helldivers from Arrowhead.
I aught to try out their other games perhaps

Played XCOM the other day and just remembered how good this game is. Anybody who likes a bit of base management and turn based action check it .

I am currently playing Tale of Toast the most simple minded mmo I have ever played (im liking it). Also if you like XCOM you should look out for Mutant Year Zero: Road to Eden. Take this with a grain of salt though cause its not out yet and I havent seen any gameplay… yet.

And i Forgot to say: I just finished The Walking Dead series.

even better than Life is Strange. (And LIS has 98% positive rating on steam i think) highly emotional.