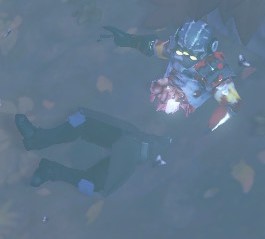 Now, it’s pretty easy to run by, around, and over the corpses of Super Earth personnel during the missions, but I grabbed a screen shot out of curiosity and took a closer look. Is this an armor set that can eventually be released to the players? I noticed some similarities to the concept art. Seeing as how the Assault Armor set made it from the concept art to the main game, I’d love to see this as it looks in the artwork appear in the game.

It would be awesome to have more armors

Personally, I’m not at all certain that armor on a dead guy is all that worthwhile to have.
However, it would be great if we could get more colorful than the primary yellow and black!

Personally, I’m not at all certain that armor on a dead guy is all that worthwhile to have.

This gave me a chuckle.