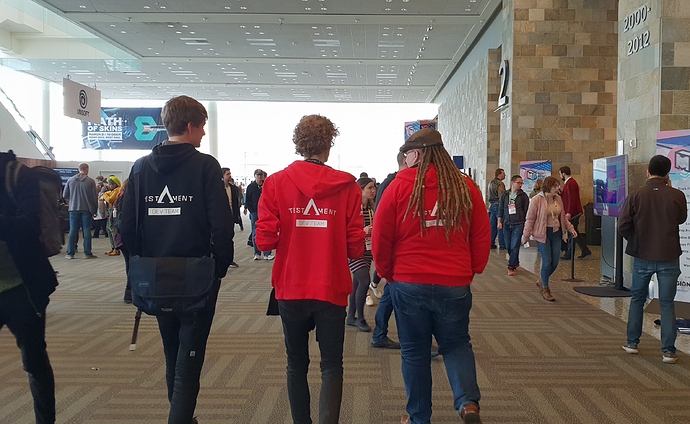 It is a real testament to our love of Arrowhead games that even though their last game released back in 2015, we are still following them excited about any morsel of news about their next game.

Surely we should be getting some game teasers soon ? ? ?

Surely we should be getting some game teasers soon ? ? ?

If it is being worked on for PS5 launch, then I don’t think we will hear anything about it until E3 2020

Maybe this is like “Revenge of the Jedi” or “Blue Harvest” on clapper board signs during filming of “Return of the Jedi” in 1982-1983? A Red Herring to throw fans off the scent.

Yeah I know most of the folks here weren’t even born then.

btw, I had to quit playing The Division 2 due to debilitating motion sickness (despite it being a 3rd person game). Which I think cinches it that I won’t care about Arrowhead’s next cause I largely can’t even play 3rd person games without getting sick anymore.

Don’t ask me why I can play FPS Killing Floor 2 all night long without nausea.

Is this ‘testament’ something that already exists or a new concept. I looked up the word and found an Amiga game. So, is it an old or a new testament?

I always liked that one better anyways, less information about who begot who and applicable trade-values of various cattle. Will be cool to find out what it actually is.

I imagine whatever Arrowhead’s next game will be about, it will be subverting the setup in some way.

If they didn’t mean “Hell” the way we mean “Hell,” why would they use the word at all?

They could’ve just called the game…

And I think you mean INVERTING, since the “A” on the back of the event shirt is clearly an upside down V.

So I theorize the game is all about people running around upside down. Maybe anti-grav?

If they didn’t mean “Hell” the way we mean “Hell,” why would they use the word at all?

Edit: All that said, when Arrowhead used Inner Circle of Hell for difficulty level 15, that is a reference to Dante’s Inferno which is a reference to the Hell from non Super Earth religions. But this again is just a pun / play on words and not to be taken literally.

I looked up definitions for “Testament.”

Assuming Arrowhead hasn’t become a bunch of Bible-thumpers (no offense to Bible-thumpers), perhaps #5 might have something to do with the game.

Or, maybe it’s like Blue Harvest or Revenge of the Jedi movie titles in 1982-1983. It’s just a red herring to throw gamers off the trail.

If this is a PlayStation 5 launch title, then I guess we won’t hear anything until Sony comes down from off its mountaintop – they skipped E3 altogether this month – to break its PlayStation 5 tablets on the rocks and start yakking about it.

If this is a PlayStation 5 launch title

That has been my guess for a while now. It wouldn’t make sense for Arrowhead to keep hiring and adding people and working on it for year after year in total silence unless Sony was fully funding the development for a PS5 launch title.

If it was going to be a Steam / Epic or Xbox or Nintendo title, they would have teased it out in some fashion other than wearing some Testament jackets while their team attended some event or other.

I really commend Arrowhead ability to keep the lid on things. They have a loyal dedicated team not leaking stuff to detriment of the companies hard work for many years. I am fine with waiting until they are ready with release imminent along with launch of PS5.

As for definition of Testament

So it could be religious or not. However Arrowhead works that into the lore / story of their next game, I expect the tone to be subversive and there to be abundance of satire / humor. First and foremost they are about making games that are fun, and so I don’t expect them to take things too seriously while the game characters can very much be taking things too seriously, but from our perspective it would still be more entertaining than to be taken seriously.

Like consider the recent Halo Infinite trailer where Master Chief is awakened from his space sleep and all he can talk about is it’s time to fight. He really means it, and the audience is suppose to be all in on that “finish the fight” mentality (even though its kind of comical) like an 80’s action movie. With Arrowhead, situation like that, the character might be serious, but the audience would not be expected to really take it that seriously and see it for being as comical as it really is.

Hopefully what I am saying makes sense. I just view Arrowhead as someone that knows their audience is smarter than to take 80’s action tropes or any tropes seriously. I think they would expect their audience to be in on the comical / humorous stuff and I love how much character they put into seemingly simple game like Helldivers with so many satirical cultural references from trophy names / descriptions to ship dialog conversations to equipment descriptions. It’s something they clearly enjoy doing, and I enjoyed it, so I expect that part of their sense of humor to continue. It’s been there in all there games that I have played so I consider it part of their DNA.

Not sure why but the art we have seen screams “old world, new people” to me

A will, esp. one that related to disposition of one’s personal property

Following this, could be an old world given to a new generation, or even this more modern definition:

Something that serves as a sign or evidence of a specified fact, event, or quality

Like an old world serving as a monument to the strength of a forgotten civilisation.

Or what if this is Arrowhead’s last game and this will be their legacy :OOO